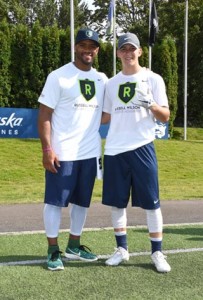 Sisters’ 16-year-old Tyler Friend had an opportunity of a lifetime recently by attending the Russell Wilson Passing Academy (RWPA) in Seattle, Washington.

Friend is the son of Dena and Josh Dunn. Josh is an active member of the United States Air Force and is stationed at Joint Base Lewis-McChord in Washington. Every year, the Russell Wilson Passing Academy opens up a few places to scholarship athletes that are a part of a military family. Friend was chosen by his father’s chief as one of two representatives from his base.

The one-day camp is offered three times in different locations across the Northwest. Friend attended a camp in Seattle, located at the Starfire Sports Complex. A total of 471 kids ages 8-17 participated. Several coaches from across the country ran the camp and Wilson, the quarterback for the Seattle Seahawks, was on hand throughout the day greeting participants, watching athletes and offering pointers.

The RWPA is a camp for all football positions and is designed to help develop the fundamental skills of being a great football player through instruction, but they have a larger goal.

According to their website, “the RWPA exists to promote the mental and physical development of youth, with the goal of encouraging kids to develop high character and moral standards, a sense of competitiveness and fair play, a respect for authority, service to others, and a love of God, family, and country.”

Friend, who plays wide receiver for the Outlaws, enjoyed the opportunity to meet other football players and learn from different coaches. The 5.5-hour camp included warmups, group instruction and several group and one-to-one drills. Friend enjoyed the seven-to-seven drills the most – where Wilson watched him make two touchdowns.

“Working on the things we work on every day, but having another set of coaches watching helps you perfect your craft,” says Friend. “Other coaches see things your coach may have missed, and it only helps your game.”

The coaching staff at the camp definitely saw something in Friend, as he was recognized as one of 10 campers to receive an award. The Gatorade “G” Award recognized the camper who not only showcased a rare combination of skill but their desire to reach their true athletic potential, which inspired other campers to follow suit.

“I love watching Tyler encourage the other kids,” said Friend’s mom. “He is always the first to offer a high-five or a hand to stand up. Not only is he performing well, but he is the first to look at other kids and offer encouragement.”

“The investment my current coaches, Thorson, Fendall and Gruney, have made in me allowed me to push myself at camp,” said Friend. “I appreciate the training the SHS coaches gave me to apply it to camp – I wouldn’t have gotten the award without those coaches.”

Friend believes accepting critique is an important part of the game.

“Coaches critique everything,” he said. “But it’s not about you; they have a passion for the game. The coaches in Sisters make it about more than football. They care more about the men and their heart. The end goal is great kids.”

Friend is proud to be a part of the Outlaws football squad and would like to invite the community to watch the team at their home opener on September 2 at 7 p.m. against the Burns High School Hilanders.