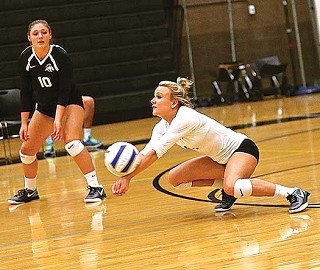 Originally published in The Nugget News, October 19, 2016
by: Rongi Yost 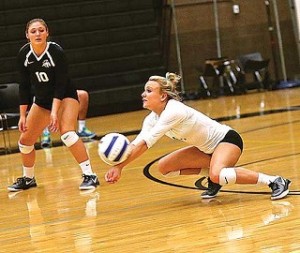 Jessie Brigham digs one off the floor for the Outlaws. photo by Jerry Baldock

Sisters served well as a team and were very consistent in their passing in Tuesday’s match-up at home against the Huskies. But on the flip side, their offense suffered. They committed numerous unforced errors, which kept two of the sets close.

Elmira celebrated their senior night on Thursday, and Sisters had quite a wait before they finally hit the court and started the match. The Outlaws came out tired, played flat, and had a hard time jumping well to hit the ball. Despite their difficulties, the squad made a quick sweep of the Falcons.

Coach Rod Jones was able to get all his players on the court, and he tried out different line-ups to try and find the one that will give them their best shot at state.

The Outlaws again served the ball well, and Hawley Harrer and Alex Hartford both had great serving runs of between seven and 10 points in a row, including multiple aces.

Brooke Knirk, who normally plays at middle, was moved to an outside hitter, and played well at that position. Emma Houck did a good job in the middle.

Jessie Brigham was hurt in the first set and had to come out for the remainder of the match, but most likely will be able to play in the state playoffs the first weekend in November.

The Outlaws are undefeated at 9-0 and were to wrap up league play with senior night on Monday, October 17, against Junction City. Jones told The Nugget the Outlaws want to finish strong on Monday and then begin preparation for the playoffs.