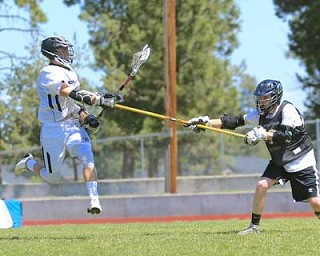 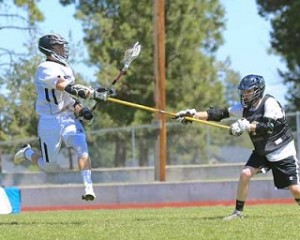 Teams from all over Oregon and Idaho swarmed intoSisters this past weekend for the Sisters Annual Lacrosse Invitational (SALI) tournament, held on Saturday and Sunday, May 7-8.

Seventy-two teams were in attendance this year, which calculated out to approximately 1,500 athletes. Add to that parents, siblings, and grandparents, and the total number estimates to easily over 5,000 people.

This year consisted of boys’ teams from third and fourth grade through high school.

“We are looking at the possibility of an additional girls’ tournament, and/or the possibility of adding girls teams to SALI,” said Liam Hughes, Executive Directory of SPRD. “The issue is we are at capacity with the fields we have between the high school and middle school.”

Hughes added, “The SALI tournament is the largest fundraiser of the year for lacrosse in Sisters. Fundraisers like this help fill the gap between what parents pay for their children to play, and the actual cost of running the program. Without events like this, and all the people that work hard to pull them off, costs would get too high for many families to afford.”

This year’s event required 128 individual volunteer shifts, in addition to the volunteers on the Lacrosse Advisory Committee and SPRD staff, who have been working together for months to make this tournament happen. Some people took multiple shifts, but Hughes estimated around 60 individuals worked on the tournament, not counting the vendors.

Sisters High School’s varsity squad played a total of four games, and were unable to post a single win. On Saturday, the Outlaws fell 8-4 to the Central Oregon Stud Muffins.

Sisters came back to make it a close first half, but struggled in the second half. Sisters’ second game ended in a 13-3 loss to McNary. The Outlaws were physically and emotionally tired, especially after all their hard work to help prepare for the tourney.

On Sunday, the Outlaws lost 3-2 to Ridgeview in overtime. It was an exciting game that was close the entire way. Both teams fought hard, and the Outlaws suffered the loss in the Braveheart overtime.

Coach Eric Wentzel said, “Sisters put on a great tournament, and with parents and players’ help, made it very successful. All of the Sisters teams put forth a great effort during their games. It was awesome to see players for different ages cheering each other on.

“Many of the teams that come to SALI in the younger age groups (eighth grade and below) are select travel teams, so we get a chance to face some tough competition.”