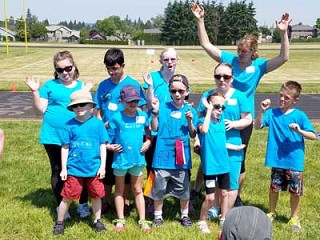 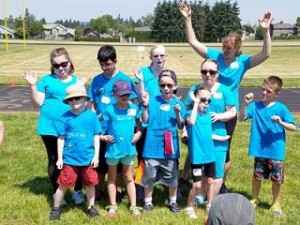 Asher Davis, who has been visually impaired since birth, got the chance to compete at the Oregon State Track and Field Meet, sponsored by the Northwest Association for Blind Athletes (NWABA) and the BVIS Fund (Blind and Visually Impaired Students).

The event was held at Ackerman Middle School in Canby, on Friday, April 29.

The annual event is open to all Oregon Regional Vision students, ages first grade through highschool, and consists of a wide range of running and field events. The mission of the NWABA is to provide life-changing opportunities through sports and physical activity to individuals who are blind and visually impaired.

People of all ages who are blind or visually impaired are often left out of sports. There are nearly 56,000 blind and visually impaired students in the United States, and 70 percent do not participate in even a limited physical-education program. When their friends are playing sports like baseball, basketball, football, soccer, etc., they are isolated on the sidelines. This results in lack of fitness and muscular strength and limits their self-esteem and confidence.

The NWABA’s solution is introducing individuals with these impairments to sports. They’ve found that once they experience sports and physical activities, the participants have more self-confidence and open up to the possibility that they really can pursue their dreams in both sports and life.

Davis, a student at Sisters Elementary School, was born with occular albinism, which translates to pretty severe vision impairment. He’s in first grade this year, which made him eligible to compete at the event.

Davis, along with his dad and mom, Jeremy and Amy Davis, and brothers Bryant, and Jace, went up to Canby the night before the meet, and stayed in a hotel, along with several other Central Oregon visually impaired students and their families. The participants decorated their bright blue shirts, which they would wear the following day, and then hit the pool, and quickly became friends.

Participants came from all over the state, with the 10 Central Oregon students from Sisters, Redmond, Bend, Madras, La Pine and Prineville, traveling the farthest.

On Friday, the event began, and events were totally adaptive to the participants needs. Some events made balls beep, so if the kids couldn’t see they could hear how far they’d hit or thrown the ball. Blind students all participated in the running events tethered to a guide. It was 90 degrees outside, and very hot, but the intense heat didn’t affect the kids’ dispositions.

In the field events, Davis threw an actual discus, tossed the shot-put, golfed, long-jumped in an actual long jump pit, and kicked a ball.

Asher shared his favorite parts about the event.

“My favorite thing was when I got first place in the 100-meter,” said Davis. “I liked the long jump too, because I jumped so far. The sand was really hot, and after I jumped sand flew into my shoes and that kind of bugged me.

“I got to meet Wyatt, Jacob, and Laila, who were all from Central Oregon,” added Davis. “It was all really fun, and I want to go again next year.”

Asher’s mom, Amy, said, “It was so cool. Everybody was so happy. The kids were competitive, but it was more about the experience. They were all just having fun. It was fascinating to me the range of impairments and how they could all just be kids, playing and having fun. It was really neat. I didn’t even know things like this existed.”

Middle school students from Baker Prairie Middle School in Canby facilitated the many stations, and were a huge encouragement to all the participants. They made sure sunscreen was handed out, offered water, and prior to the event constructed handmade paper ribbons that they gave to every entrant.

“I loved seeing them out there,” said Amy. “They were so encouraging and positive.”

Shandra Harris, vision specialist from the High Desert ESD, works with Davis at Sisters Elementary, and shared her perspective.

“As teachers of students with vision impairments, our goal is partnering with families, schools, and potential employers to provide access and independence in everyday opportunities the typically sighted community often takes for granted.”

Harris shared that when families connect at casual events, such as the annual BVIS Track Meet, it’s often the springboard to lifelong friendships and networks.

Of the meet itself, Harris said, “It’s a joy to see pleasure in the faces of children with significant vision impairments, and their families, who realize – often for the very first time – how fast they can run, and how far they can jump or throw. We’re very grateful for the grant monies that provide these and other events. We’re especially grateful for families such as the Davis’, who take the time to invest in their children’s futures.”