Sisters youths get a taste of the ballroom 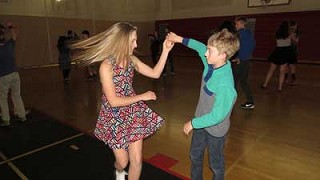 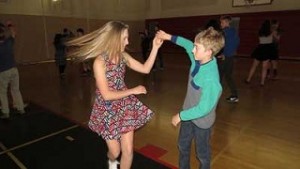 Seventh-and eighth-grade students at Sisters Middle School took a special lesson during their PE class the past few weeks: they learned the Western swing.

“We’ve been teaching this unit for 12-13 years,” said technology teacher Wes Estvold. “My wife and I took swing classes a number of years ago and it’s been something I like to share with the students.”

They said that, “It was fun doing something different, instead of sports in PE.”

“We taught Western swing this year,” said Patton. “In the past we have taught other ballroom dances including the waltz.”

The teachers direct the unit to encourage the students to learn several things about themselves beyond the basic dance steps. Throughout each lesson, instructors talk about social etiquette, how to ask someone to dance and how to respond politely when they ask. They focus a lot on body language and what body language may be saying even if words say something different.

“Your body language will tell if you don’t want to dance with someone. Fake it ’til you make it,” said Patton. “There is no class that teaches social skills – and students need them. We encourage them to try something new and get out of their comfort zone.”

The teachers purposely plan the dance unit before the annual semi-formal dance for the 7th-and 8th-graders called the GIG.

Over the years this lesson has made an impact on both the students who have participated and how adults view SMS students at social functions. Mel Petterson, who has had children go through the Sisters School District – her youngest Brogan is an 8th- grader this year – recalls DJ Dave Starr several years back stopping the music at Eighth Grade Promotion to commend the students for their dance abilities and knowledge.

“He said in all his years of DJing he had never experienced youth waltzing and swing-dancing,” Petterson said. “He complimented all the students and told them how cool it was they were dancing very classy and keeping alive the traditional dances.”

The teachers note this unit runs smoothly – even though most students come in without having any background in dance. Everyone is just as nervous as the person next to them. Students typically rotate partners every few minutes; by the end of the period students have danced with each person in the class at least once, sometimes as many as three times. After the two-week unit many students see their barriers dropped. All the students are smiling and laughing together.

“Interacting with each other and feeling comfortable (with each other) was the best part,” said Samantha Silva, an 8th-grader who also participated in the unit.

“We see the lessons (learned in dance) extend to interactions in the hallways – kids say ‘hi’ to each other,” says Thorson. “Students that have supported each other in dance are more apt to support each other in different classes.”