Sisters Students Turn Themselves Into Detectives 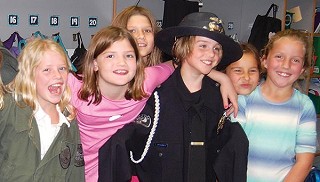 Originally published in The Nugget News, October 19, 2016
by: Erin Borla 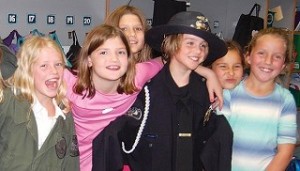 Sisters students had their Storyline come alive with a visit from local law enforcement. photo by Erin Borla

Julie Holden, fourth-grade teacher at Sisters Elementary School (SES) has been working with her class for the last several weeks to create the Outlaw Detective Agency. The first book the students read this year was a mystery and it gave Holden the idea for a “Storyline” project.

“Mysteries can be super engaging,” said Holden. “This is a genre I wanted to introduce to the students and have them tackle it in both their reading and writing.”

Over the summer teachers from both Sisters Elementary School and Sisters Middle School took advantage of a “Storyline” workshop provided to them by the Sisters Folk Festival Studio to School Program.

Through this process students learn a variety of curriculum based on the telling of a story. Students can learn social studies, history, math, technology and language concepts through real-life examples.

The five-day workshop held in July, focused on training teachers to integrate the Storyline curriculum into their classrooms. That’s happening with work like Holden’s project.

Students in her class have used their creative thinking to come up with their own agency including developing the layout of their office and creating the personas of each of their own detectives. They even made their own face out of construction paper and other materials to match the detective persona that they have developed.

“I am looking forward to finishing the faces and seeing how they turn out,” said Zach, a member of the class. “Mine is 27 years old and has donut hair (AKA a bald spot).”

Holden’s theme was helped because three students in her class have family members in law enforcement. On a Wednesday afternoon, Deputy Brent Crosswhite, the School District’s School Resource Officer from Deschutes County Sheriff’s Department, along with Lt. Chad Davis (DSCO), Det. Eric Beckwith from the Redmond Police Department, and Terry Simons, a retired police officer from Southern California, came to Holden’s class and talked about their roles in law enforcement.

For 45 minutes, each guest described their jobs and helped give ideas to the students about what detective’s might need in their crime scene kits and how to look for the who, what, when, where, why and how of every crime.

Detective Beckwith brought in SWAT gear for Holden to try on for her class.

“This project has helped us to learn to work together,” said class member Alexis. “How to help each other and be more of a team.”

Students will continue with this Storyline by writing their own mysteries, building their own crime scene kits and using their science and reasoning skills to help solve crimes from the mysteries they create. Holden hopes to integrate some public speaking skills as well, having the students work on ‘advertising’ their agency to draw more people into their business.

Many students are looking forward to the completed projects and delving into mysteries that their made-up detectives can solve.

“This is great because student’s learn how to solve problems using logic and narrowing down the suspect pool,” said Holden.

Other classes at SES are also participating in the Storyline model. Each teacher chose the theme for the class. Students are working on their own pet shop, creating the perfect school, developing a restaurant and others.

Students are enjoying being creative and exploring new ideas along a similar concept. Many have rave reviews about the storyline concept.

“This has been really fun,” said Cathryn Scholl. “Every class in the world should do it.”