A student from Sisters will get to meet first lady Michelle Obama on Tuesday because of her involvement with Caldera, a youth-mentoring art program that just won a national award.

Caldera is one of 12 organizations to win a 2015 National Arts and Humanities Youth Program Award. The nonprofit, based in Portland and also serving Central Oregon, focuses on reaching out to lower-income students who might not otherwise have much exposure to art and the outdoors.

“It’s just an absolute honor,” said Jessica Lovejoy, the program’s Central Oregon high school mentor and curriculum coordinator, on receiving the award. “It’s unbelievable, and I can’t wait to see how it develops our program and our work.”

Lovejoy helped choose one of her mentees, Alena “Narwhal” Nore, 18, to go to Washington, D.C., to be recognized for the award. Nore will travel with the program’s executive director and one of its mentors to visit the White House .

Nore has been involved in Caldera for six years. She earned her “camp name” Narwhal during her first year in the program when she made a Claymation of a narwhal.

“Narwhals are real creatures; they’re not mythical,” Nore said, giggling, and admitting she knows “a lot more about narwhals than probably the average person should.”

A senior at Sisters High School, she works in a variety of mediums, including painting, drawing, sewing, printmaking, writing and digital painting.

Lovejoy said it was tough to decide who among all of her “amazing” mentees would go, but Nore came to mind because of how much progress Caldera staff have seen her make.

“Partially it’s because of that growth that we got to witness over time,” Lovejoy said. “And she’s not afraid to speak her mind and speak her truth. It has to be someone comfortable speaking on behalf of the program.”

Nore herself is the first to acknowledge her transformation, in part from participating in Caldera’s workshops and hiking trips.

“I was interested in art, but I never really had the confidence to do it. … I was a very shy, timid seventh-grader,” Nore said. “I was pretty anxious about creating mistakes.”

Lovejoy said when she joined Caldera a few years ago, Nore was on her first weekend outdoor trip. It was the year before Nore started high school. When they were about to hike, it began pouring rain, and Nore was afraid that if she stepped on the trail, she might slip and fall. The mentors and other students encouraged her to try, and by the end of the weekend, they saw a big change.

Over a couple of days, Nore became the “trail boss,” Lovejoy said; the rest of the women had to tell her to slow down so they could keep up.

Lovejoy said that since then, Nore has continued to grow, especially as an artist.

“She’s tapped into the beauty that is her artwork,” Lovejoy said.

And even though Nore has delved into a variety of mediums, she has a favorite.

“I really love watercolor; watercolor is my go-to medium,” she said. “A lot of people worry about how it blends, but I really embrace it.”

In her senior year, Nore has stayed involved with Caldera, but she’s ventured into projects of her own, too, such as selling her art at the Sisters Farmers Market over the summer through her own business, narZart. Plus, she said, she’s been applying for colleges over the past few weeks.

Among her top picks? Stanford, Dartmouth and Pomona College. She wants to major in psychology with a double major or minor in studio art so she can work in art therapy.

“Caldera not only provided me with a community of constant support and love but also helped me recognize my artistic talent, and they encouraged me to pursue that,” Nore said.

And if she gets a chance to speak to Michelle Obama next week when she visits the White House? Nore said she’ll tell the first lady it’s “an honor.”

As for Lovejoy, she’s proud of who Nore is today — an artist, an ambitious student and someone people are excited to be around.

“She shows up in life,” Lovejoy said. 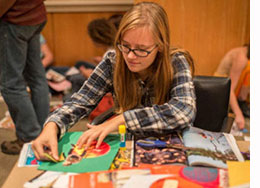 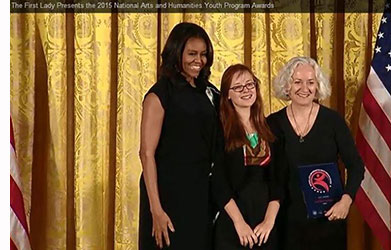