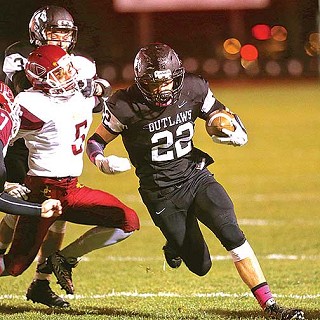 Originally Published in The Nugget News, October 19, 2016
by: Rongi Yost 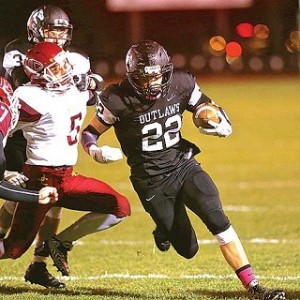 Johnny Gurney runs for a touchdown vs. Junction City. photo by Jerry Baldock

Sisters shook off a sluggish and uninspired first half on a wet field to break open the game and post a 42-19 homecoming win over the visiting Junction City (JC) Tigers on Friday, October 14.

The contest started off slow, and Sisters was hampered by three turnovers in the first half. After a scoreless first quarter, Sisters got on the scoreboard when Johnny Gurney ran for a 10-yard touchdown, which was followed by a Minam Craven’s kick that sailed through the uprights.

JC responded with a 12-yard touchdown score to even the score at 7-7.

After a long drive late in the second quarter, Johnny Gurney reclaimed the lead for the Outlaws with a 14-yard touchdown off the left side. Cravens kicked the PAT and Sisters went up 14-7. However, a breakdown in special teams resulted in a long run on the ensuing kickoff, and JC took the ball to midfield. After several plays, the Tigers scored and cut the deficit to 14-13 as teams entered the half.

Sisters came out strong in the second half, eliminated mistakes, took control, and broke the game wide open with a 28-point barrage in the third quarter.

Christopher Luz took the opening kickoff deep into Tigers territory on a well-executed kickoff return. On the next play, Jacob Stevens broke up the middle on a well-blocked inside run, and went 34 yards for the TD.

Sisters forced the Tigers to go three-and-out on their next possession, and the Outlaws’ Stevens went wild again, this time in the form of a 45-yard TD run. Stevens’ consecutive scores were followed by Gurney’s third rushing touchdown for the night, a one-yard TD run.

Late in the third quarter, Tanner Head found a wide-open Luz on a 23-yard touchdown, which wrapped up Sisters scoring on the night. Cravens was good on all four of his second-half PAT attempts.

Led by Stevens, who had eight carries for 99 yards, and Johnny Gurney, who had nine carries for 89 yards, the Outlaws tallied 204 total rushing yards and had 294 total for the night.

Minam Cravens and the point-after crew were perfect for the night, going six-for-six on PATs.

Tyler Head stood out at his rover position, and has been a force for the Outlaws all year long.

“Tyler is a three-year starter for us, and no question one of the best in the league in his position,” said Coach Gary Thorson. “He does an outstanding job on the outside run for us.”

Thorson added, “In an emotional beginning to the game, just before kickoff, Sisters ran a special play that featured a special member of the 2016 team. Senior Brian Groat (No. 14), a familiar face on the Outlaws sideline and much-loved student at Sisters High School, took a handoff around the right side and up the sidelines on a 50-yard run against a classy JC defense, which brought the crowd to their feet and started the night off right.”

The win against the Tigers locked up a second-place finish for the Outlaws (3-1 in Sky-Em and 5-2 overall) and guaranteed them a first-round home playoff game. Sisters will wrap up league play at home on Friday, October 21, against the Sweet Home Huskies, and will honor their seniors prior to kickoff.