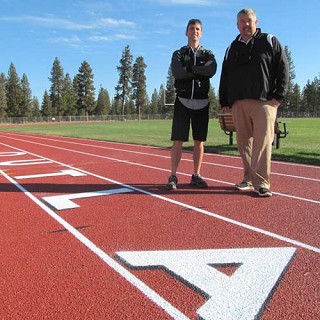 Originally Published by: The Nugget News
by: Steve Kadel 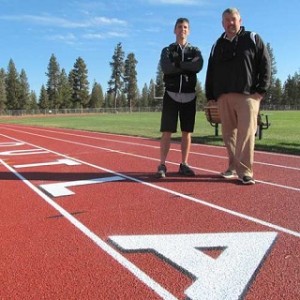 The two projects are the first to be funded with money from the $10.7 million bond measure voters approved in May. Hudson will oversee all aspects of bond construction, with his salary paid by bond money.

He was happy with the track surfacing work done by Beynon Sports Surfaces, the company that installed the University of Oregon’s Hayward Field track.

“It’s great,” Hudson said. “We hired a really good company with a lot of experience.”

A new running surface was needed because frost heaves and tree-root upheavals made the track unusable for competition. Now, the Outlaw track and field teams will be able to host meets in Sisters again.

Tri County Paving of Redmond did paving work for the track and tennis courts while Robinson & Owen Heavy Construction of Sisters did the construction. Response to Nature of Sisters installed new sod around the football field’s perimeter.

Other construction authorized by the bond passage will start in earnest after an architectural firm is hired. Sisters School District Superintendent Curt Scholl has said he hopes that decision will be made during the November school board meeting.

Meanwhile, members of a citizens’ oversight committee to monitor spending and construction related to the bond are expected to be announced during the Wednesday, October 5 school board meeting. It begins at 5 p.m. at the District administration office.