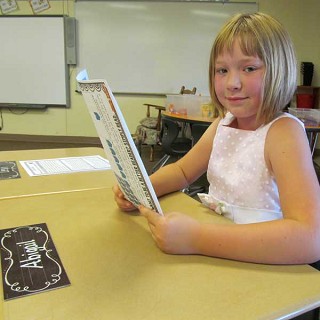 Originally posted on The Nugget News, August 30, 2016
by: Steve Kadel 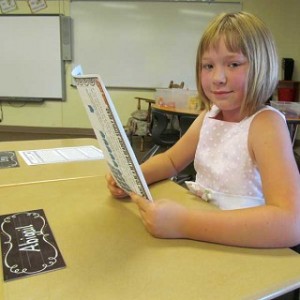 Isabelle Norman broke out in a big grin as she walked into her classroom at Sisters Elementary School last week.

“I missed you,” she exclaimed upon seeing teacher Gretchen Lane, who taught the 7-year-old girl last year.

“I missed you, too,” Lane replied, noting Isabelle will be her student again this year as a second-grader.

It was the annual Stop and Drop event for first- through fourth-graders. The hour-long program gave kids a chance to see their new classroom and put supplies in cubbyholes in a relaxed atmosphere before the work of school begins.

“This relieves the anxiety about the first day of school,” Lane said. “These little ones look forward to school all summer, and when it gets close they want to see their room and everything.”

Selah Sanford, a 6-year-old first-grader, couldn’t contain her excitement. Standing beside her father, James Sanford, Selah jumped up and down in her new classroom.

“I’m so excited about school,” she exclaimed. “I’m looking forward to seeing all my friends, and doing math.”

Dad just smiled at the display of enthusiasm, happy for his daughter’s attitude about school.

Teegan Welsh, 8, was less demonstrative but also pumped up about the coming year. She’ll be in third grade this year, and it will be her first time in a public school after recently moving from Beaverton.

Part of the attraction of entering Sisters Elementary School is the number of children who will be in her class. Twenty-eight students are slated to study under Kirk Albertson – 19 more classmates than Teegan has ever had before.

It also will be the first time Teegan and her mother, Shawn Steele – a teacher – will be separated for the school year. Before, they were in the same private school, but Shawn has found a job at Black Butte School this fall so the two will split up.

That didn’t worry Teegan on Thursday as she buckled down to the task of filling her cubby with supplies.

Finding her name on the wooden space was a victory in itself.

As the socializing continued throughout the building, Principal Stoughton tried to meet as many parents and students as possible. She said the Stop and Drop afternoon helps teachers as well as students because it gives them a chance to get organized before the first real day of class.

“We allow them to bring supplies so they don’t have to bring a big backpack the first day,” Stoughton said.

Sisters Elementary ended the last academic year with about 332 students, she said. Stoughton and office staff will spend the first week or two of school adjusting enrollment figures, finding out who’s new and who didn’t come back after attending last year.

Stoughton doesn’t monitor the enrollment figures simply because the state allocates funding based on head counts. Instead, she wants to know what happened to those whose children won’t be coming back this year.

“We’re about family here,” she said.