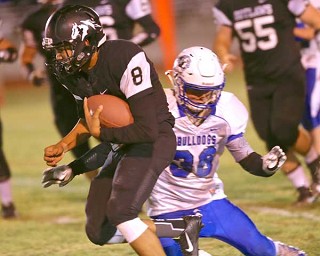 Originally published on The Nugget News, September 27, 2016
by: Rongi Yost 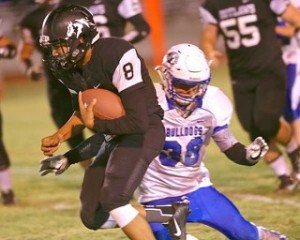 Christopher Luz accounted for 286 of Sisters’ 568 all-purpose yards, in Sisters 44-0 shutout over the Sutherlin Bulldogs at home on Friday, September 23.

Luz racked up 199 receiving yards and two touchdowns to lead Sisters to the win in the Sky-Em opener. Christopher got the stadium on fire when he returned the opening kickoff 87 yards for a touchdown.

In the second quarter, after a long drive, Will Miner scored his first touchdown as an Outlaw on a three-yard run. Late in the second quarter, Luz caught an 85-yard pass from Johnny Gurney off a reverse, and at the half the Outlaws held a 21-0 advantage. Minam Cravens was responsible for all three extra-point scores.

The third quarter was highlighted by a pass from Tanner Head to sophomore Korbin Sharp, who made a nice move and scampered down the field for his first touchdown of the season.

Ethan Morgan scored on a four-yard run in the fourth quarter, and Cravens added the PAT. Minam kicked it through the uprights for a field goal to close out Sisters’ scoring effort.

Coach Gary Thorson said, “Minam Cravens continues to be a weapon for the Outlaws. He made all of his attempts on PATs and hit a 34-yard field goal.”

The Outlaws finished up the night with 182 yards on the ground and 209 in the air, but they were hampered by eight penalties and three turnovers.

Ryan Cook led the team in tackles, with four tackles for loss, nine assists, and three of them for a loss. Jacob Stevens added a pair of tackles and had nine assists as well. Stevens, Tyler Friend, and Tyler Head each recorded an interception.

“The defense was stingy on the run most of the night, and limited Sutherlin to just 62 yards rushing for the night,” said Thorson.

Thorson said, “We struggled badly with penalties and missed assignments on offense after the opening score for most of the first half, before finally getting into a rhythm offensively. As a group, I do not think we came out mentally ready to play football and it showed.

“We are headed to a crucial stretch in league play as we now go on the road against two currently unbeaten teams, Cottage Grove and Elmira, who are both 4-0. As a team we are progressing well each week of practice and continue to improve. It will be crucial we continue to do so as we now face better competition this second half of the season.”

Sisters will travel to Cottage Grove on Friday, September 30.