Middle Schoolers Can “Take A Hike” 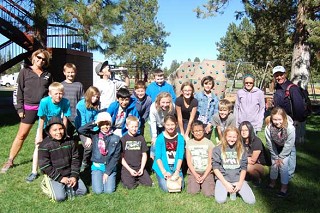 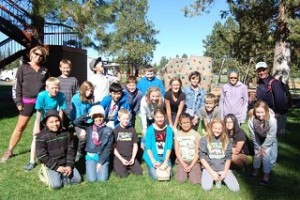 Originally published in The Nugget News, September 13, 2016
by: Erin Borla

Sisters Middle School English teacher Becky Aylor challenged middle school students this year to “Take a Hike.” After school two days a week, students are invited to hike with her to get outside, get moving and give them something positive to do after school.

The first Take a Hike outing was last Wednesday, September 6, and she had 22 students participate for a 2.11-mile hike.

Students gathered by the playground as Aylor finished her bus duty, and then she double-checked all permission slips and handed out a healthy snack.

“The first person who signed up spun around blindfolded and pointed in a direction and that’s the direction we took off,” says Aylor.

Throughout their 4,055-step hike students noted the animals and insects they saw. Students were able to trade off walking and talking with Aylor and she noted the conversations they had were “rich, deep, and often humorous.

“One of my favorite things was that a sixth-grade girl said she had never been to the High School before and commented on how big it was,” says Aylor.

Aylor started the program because she wanted to get out and “get her steps in” every day – noting she was aiming for 10,000 steps per day. She turned her own goal into a way students could do something positive for their own health.

After each hike students are able to return to Aylor’s classroom and get a bead for each mile they walk. Aylor will continue the “Take a Hike” program after school Mondays and Wednesdays rain or shine every day except Halloween. If a student shows up to every event they will have walked 36 miles.

“That’s almost to Hoodoo and back,” notes Aylor.

There is still time to sign up for the “Take a Hike” program. The cost is $10 per student and they need to fill out a permission slip to participate. The $10 goes to pay for snacks for the group for the entire trimester. Students and parents can connect with Becky Aylor at school or via email at becky.aylor@sisters.k12.or.us.