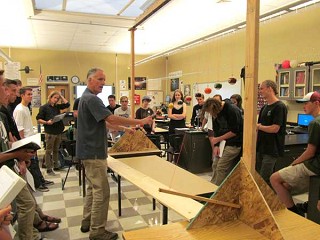 Originally published in The Nugget New September 13, 2016
by: Steve Kadel

He held 30 students’ interest for more than an hour while teaching a physics class that began just minutes after 8 a.m., a time when most teens aren’t primed for anything involving mat 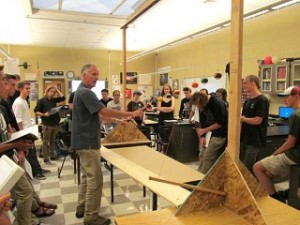 Engaging his students is an enjoyable test for Corrigan, who said he “loved” math in high school.

“Physics, calculus and sailing were resonating with each other,” he said with a grin.

Now he wants to impart his own fondness for math and science, which he’ll be teaching this year. Corrigan taught four years at Sisters High before taking last year off to serve as general manager of the Bend craft brewery Crux Fermentation Project.

Two other instructors are beginning jobs at the school this fall. Sheryl Yeager will teach flight science and help out with physical education and health while Jami Lyn Weber will teach English.

Sisters principal Joe Hosang wrote in a greeting to parents this month, “How can we go wrong with a last name like Yeager to teach flight science?” It was a reference to former military test pilot Chuck Yeager, who is the first person to surpass the speed of sound on a level flight.

Weber is a 23-year Sisters resident who has a bachelor’s degree from Wheaton College in Chicago and a master’s degree from Lewis & Clark College in Portland. She taught at the middle school and high school in Sisters years ago, including long-term subbing, before teaching two years at Sisters Christian Academy.

“I try to create a community of thinkers, readers, and writers where strengths are celebrated and challenges are overcome,” Weber said. “We will try to do rigorous but rewarding work that matters to them now and in the future.

“I try and really emphasize the gift it is to think for oneself, to be able to confidently express yourself, and to learn from thinkers and writers from the past and around the world to determine how we want to live now and in the future, and the difference we want to make in the world.”

She added it’s a delight to be working with a talented SHS group of educators, saying, “I couldn’t ask for a better staff to work with – they are scholars as well as super caring.”

Corrigan brings a wealth of high-tech experience to the job, having worked seven years in California’s Silicon Valley. His jobs there ranged from senior vice president of sales and marketing for a company with nearly $1 billion in sales to a two-year stint with Apple, where he helped develop the first consumer digital camera in cooperation with Kodak.

The Harvard University graduate and his wife made a conscious decision to move to Sisters several years ago, citing the good public school system for their then-young children as well as the recreational opportunities.

Corrigan joined the Sisters School Board in 2005 and was chairman from 2006 to 2007. He’s volunteered for many school and local community projects, and is happy to be back in the classroom.

“It’s not for the money,” he said of the decision to teach again. “I missed the (educational) process.”

Corrigan said he enjoyed the brief association with Crux Brewery, but ultimately found it less satisfying than teaching.

He showed an easy, engaging manner while teaching the 8:05 a.m. physics class last week. He’s even comfortable enough to make fun of himself, telling students after a coffee-cup mishap, “Yes, I did just pour coffee all over myself.”

Later, during a free period, he showed his compassion after spotting a new transfer student sitting all alone. Corrigan immediately found a member of the school’s LINK Crew organization who befriended the new boy.

“It just breaks your heart to see that,” Corrigan said.

Like all good teachers, he believes that every youngster has the ability to learn.

“Teaching is about making it interesting for them,” he said. “That’s my challenge.”

He almost always succeeds, according to student Andrew Stevens, who has taken five courses under Corrigan.

“He’s quite entertaining,” Stevens said. “He doesn’t just teach from a book.”

Hosang is happy to have Corrigan back, too.

“He’s just a super-smart guy, had a bunch of start-up businesses, and worked at think-tanks,” the principal said. “He brought all that knowledge here and is extremely talented at teaching math and science.

“He doesn’t want anyone to fail. He will consume himself with how a struggling student can pass his course.”

Corrigan noted that some people believe schools should be run like businesses. But there are differences that prevent that comparison from being valid, he said.

“You can’t fire students,” he said.

He added that teachers are doing an important job for which the compensation is relatively low.

“We’re banking on the future with underpaid ‘volunteers,'” he said, meaning staff members, “but we all care deeply.”

Besides new teachers, there are a few other assignment changes for high school staff this year. Tim Roth will continue as athletic director while also taking on some instructional and student discipline responsibilities in an assistant-principal role.

Also, Jillian Frankl will be the primary secretary for communications and events in the main office. Hosang called her “positive, resourceful and full of energy.”