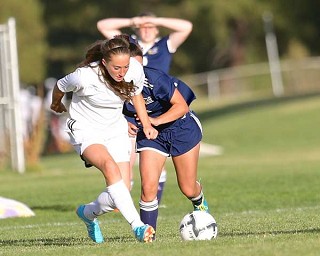 Originally Published by: The Nugget News 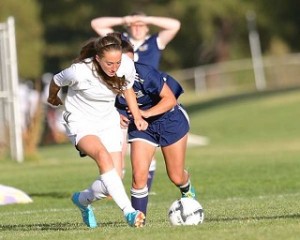 Brooke Robillard moves the ball up the field vs. Cottage Grove. photo by Jerry Baldock

The girls soccer squad snapped their losing streak with 4-0 shutout over the Cottage Grove Lions on Thursday, September 20. Two days earlier they fell 3-1 on the road at Junction City.

Sisters blanked the Lions at home in Thursday’s big win, in an outstanding game that showcased what the Lady Outlaws are capable of.

Three minutes into the contest, Rylee Weber broke through the defense, went one-on-one with the keeper and booted the ball into the lower-left corner of the net for the goal. The 1-0 Sisters lead held until the half.

Midway through the second half, Weber repeated her first goal, but scored in the right corner of the box.

Nika Chick scored Sisters’ final two goals. With 10 minutes left in the game, Chick stole the ball back from the defense and nailed a shot from 16 yards out. As the clock clicked down to the two-minute mark, Chick went one-on-one with the keeper and knocked one into the lower-left corner to seal the win.

It was a rough game for the Outlaws, who got knocked around by the physical Lions. In the middle of the second half, one of the Lions had an illegal side tackle that put Olivia Hougham on the ground, and earned the Lion player a yellow card. Nine minutes later, she did another illegal tackle that took out Weber. Two yellow cards turned into a red one and she was ejected from the game.

The Outlaws worked extremely well together to pull off the sweet win. Allison Mansfield, Brianna Bachmeier, Lola Green and Emma Horner played on offense during the contest, and had a great game. They all moved away from the ball at the right moments and got open for their teammates.

“These girls have made huge improvements this last week, and they continue to work hard every day,” said Coach Jenna Pike. “And, they are all freshmen! Sophomore Brooke Robillard also played great on offense.”

Lexi Martin, Gracie Sundstrom, Lexi Stewart, Josie Aylor and McKenna Jones all played defense and were strong in the back for the Outlaws. They held their ground and denied a lot of shots that could have turned into goals.

Pike said, “Charlotte (Barton) had an amazing game, was vocal and communicated to her team throughout the game. All the girls played so well. It was an amazing game. The girls picked up the pace and played the way they know they can play, and got the win.

“I know it’s been a tough season, but they finally pulled it together for the entire 80 minutes. They played to their full potential. Now, we are only going to grow. I told them that the goals would show up, and wins would follow, and I’m happy it happened before the second half of league.”

In Tuesday’s match-up the Tigers scored two goals within two minutes midway through the first half and put in their final goal in the 55th minute of the second half.

Nika Chick scored for Sisters in the 65th minute. Chick got a nice assist from Lexi Stewart and then broke through the defense and knocked it in.

Charlotte Barton did a nice job in the box for the Outlaws and saved most of the Tigers’ 19 shots on goal. Sisters had 14 shots on goal, shot anywhere from 20 yards out to others that were right in front of the keeper.

Coach Jenna Pike said, “Even though this game was really rough for us, the girls kept fighting to the end. It is comforting to know that my offensive girls are comfortable taking far and near shots. Everyone shoots at a different location and can do it comfortably. Now, we just need to be a little more precise, and then the goals will show up. The girls are being very patient and waiting for their offensive plays to develop. I know that once our team can learn to consistently score, there will be no stopping them.”

The Outlaws will play at Sutherlin on Thursday, October 6.