Curtiss J. Scholl came to the Sisters School District in the summer of 2015 from the Salem-Keizer School District.  Since he was hired he has believed that the community is important to making a school district work. 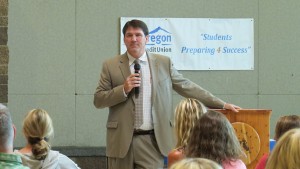 “Schools-and-community is always a strong partnership,” he noted when hired.   “Sisters is a strong school district already, and has a strong cadre of volunteers and a good relationship with the community.”

Scholl has paid attention to maintaining and enhancing that.

While working in West Linn-Wilsonville, he attended Harvard University’s “Principal’s Corner” and was recognized as a Teacher of Excellence.

Scholl has worked in the classroom as a social studies teacher for six years and also handled coaching duties for football and baseball. He was a member of the Linfield College varsity football team in 1991-93, which was the NAIA Division III National champion runner-up in 1992.  Scholl has a master’s degree in science and teaching from Portland State University and a Bachelor of Arts in history from Linfield College.

“We must always be student-centered in education developing life-long learners,” Scholl said. “It’s important that we always strive to get better and maintain focus on positive growth for the district and doing what is best for students. I am excited about the opportunity to be a part of the Sisters schools with an already strong record of success and a community that has demonstrated a willingness to become involved. Working together, we can be a positive difference-maker in the lives of the district’s children.”