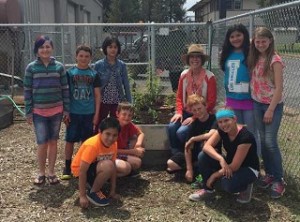 Werts works with her students to have them connect what they are reading to the real world. Several months ago the students read an article about what insects do in the winter. The follow-up discussion in class led to reading an article about monarch butterflies and how they migrate across the continent every year.

“This has been a great project for our students to connect to the world and to develop enthusiasm for ecology,” says Werts.

In order to encourage her students’ passion for the monarch, Werts wanted to connect with an expert in the field and was surprised by the extraordinary support she received.

“I sent out one email asking a few questions about monarch habitat and I got 30 back,” she said.

Werts has coordinated with agencies like the United States Forest Service, United States Fish and Wildlife and Monarch Advocacy of Central Oregon to help her class build the waystation.

It was determined that the decline in the monarch population traces back to five causes: breeding habitat loss and degradation; wintering habitat loss and degradation; disease and parasites; climate change; and pesticide use. After learning about the decline in the monarch population, the class decided they wanted to build a butterfly habitat.

Monarchs travel between 1,000 and 2,000 miles from Canada to Mexico every year. Monarchs can travel between 50-100 miles a day; it can take up to two months to complete their journey to winter habitat. Across the country there are three different migration corridors. Sisters lies on the West Coast corridor.

This species of butterfly typically produces 5-6 generations per year. The first generations have a lifespan of between 2-8 weeks. During this time they continue to move north, mate and have the next generation that will continue the northern migration. The last generation – the “super-generation” – can live from 7-9 months. These are the butterflies that will migrate south for the winter to either Southern California or the Sierra Nevada mountains of Mexico.

To do what they could to combat the habitat loss for monarchs, students in Werts’ class, along with a variety of volunteers, built a monarch waystation outside the middle school. Volunteers Dave and Joel Priest of Sisters helped to build raised beds for the specific plants, as well as installed drip irrigation to ensure the plants stayed watered. In addition to the many volunteers, both Sisters Rental and Luttons’ Ace Hardware donated lumber, mulch and other products to help this project.

“My favorite part of the project has been doing research on the different plants that monarchs like,” said student Stacey Alvarez. “Monarchs can be attracted by cultivating a butterfly garden with milkweed and nectar plants.”

During their migration, monarch butterflies have a very specific habitat – milkweed. Many native milkweed plants have been destroyed due to their toxic nature to livestock. (Milkweed is toxic to livestock, but animals will avoid it if other options are available.)

Adult monarchs feed on the nectar of many flowers, but breed only where milkweed is found. Without the milkweed plants there isn’t anywhere for the butterflies to lay their eggs. The monarch larva, or caterpillars, feed exclusively on milkweed.

Tom Landis, a retired member of the United State Forest Service – and as Werts calls him a monarch Guru – lives in Southern Oregon and has recently written for “Native Plants Journal” on monarch waystations. Landis has been working on propagating native plants to create travel corridors for migrating monarch butterfly populations for three years.

“Everything clicked for this (Sisters) project,” said Landis. “I was able to help with the plants, they have found a good spot with good sun and irrigation – and there is a great teacher that is getting the kids excited about the project.”

There are different varieties of milkweed that thrive here in the Central Oregon area and they can be found at local nurseries if community members wish to develop their own monarch butterfly waystation.

In addition to native milkweed, a good habitat also has plenty of flowering nectar plants.

Landis recommends a combination of plants – some that bloom in the spring, some in summer and some in early fall so the adult butterflies always have a food source. Milkweed may not flower the first year it is planted, but once it is established the root system will bring it back every year.

“I’ve liked getting the word out about monarchs, way stations, milkweed, and how monarchs are endangered,” said student Bodie Dachtler. “I think this waystation can make a difference.”