It's More than Just a Job for School Bus Drivers 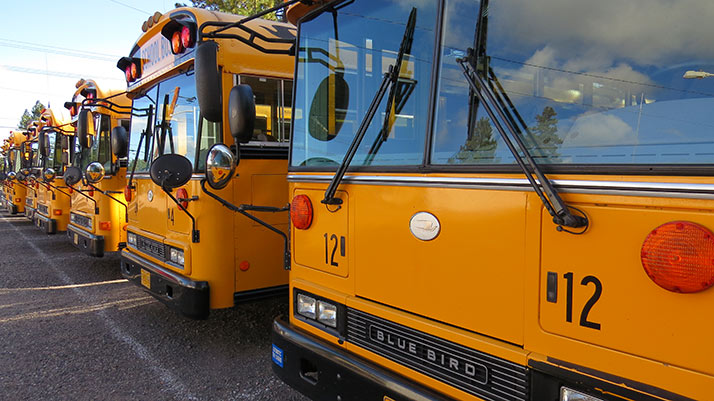 They are the first school employees to see children of Sisters Country in the morning and the last to see them in the afternoon: The unsung heroes of the Sisters School District – the bus drivers. Of the 10 full-timebus drivers employed by the Sisters School D
istrict, three have been there over 20 years.

All Sisters School District bus drivers are committed to the safety of Sisters Country children, but for thesedrivers, the job is much more. The students and fellowdrivers are like a second family.

“We do this for the kids – we love them,” says 22-year veteran driver Teri Ast. “These kids are our family.”

Along with Ast, two other drivers have hit the double-decade mark, making them the most senior of the crew. Both Cathy Negrete, who was hired in 1992 and Susan Waltosz, a 20-year driver, jumped at the chance to drive school buses when their children were in the district. It was good pay, great benefits and a chance to spend time with their own kids in the mornings and afternoons.

“The district is very supportive,” says Negrete. “When I started this was a great job for a single parent. I had time with my children during the school day and it allowed me the flexibility to get an additional job during the summers.”

Waltosz also picked up jobs as a barista and bartender around her driving schedule.

“Losing our boss was hard,” says Negrete, referring to the elimination of the SSD Transportation Supervisor position a few years ago. “We got through it. Leland (Bliss, director of operations for the Sisters School District) has been great to work with. He knows it takes a lot to make this department work. We all have a great time doing it.

“What’s kept me driving? The kids. This is an incredible job. We aren’t just driving – unlike other district staff we get to see the same kids every year, watch them grow up,” says Negrete.

“I’m their bus mom,” Waltosz says of driving 40-plus young people around every day. “I had a kindergartner tell me she loves me; it just about makes me cry. I love these kids.”

According to the American School Bus Council, a 20-mile round-trip school commute saves an approximate $420 annually for each student who rides the bus and an approximate $10.9 billion nationwide. School buses represent 25 percent of the miles traveled by students but account for less than four percent of the injuries.

With new buses (see sidebar, page 18) and an overall increase in technology use over the past several years, things have “tightened up” in the district, according to th
e senior drivers. That hasn’t kept the fun out of their routes. Some drivers have been known to bring treats occasionally to students, all store-bought now, in accordance with district policy.

Electronics have been a huge change to the routine of a bus driver – most of it positive. After sitting in school all day kids are full of energy. Having some down time on the bus, with students playing a game or listening to music makes for an enjoyable ride home

“As long as they share, they
can do what they wish – that’s the rule on my bus,” says Negrete. “I like looking back in the mirror and seeing kids sharing their music through headphones or playing a game together.”
“Cathy sings to her kids,” says Ast. “We treat them like we would want to be treated. In the beginning of the year we talk about rules and expectations, then we try to relax and let the students enjoy the ride.”

Students, for the most part behave
well on the bus. Many enjoy the quiet time to look out the window or sit with friends they may not see during the school day. Others look forward most to the cheerful demeanor and welcoming atmosphere the drivers share.

“My favorite part of riding the bus is when my driver says good morning,” says second-grader Isabelle Rex.

There is a lot that goes on with transportation of the students in Sisters; it’s not just morning pick-up and afternoon drop-off. There are away games for the various sports – each driver has their favorite team to travel with – and there are field trips. When the drivers travel with students they are allowed to enjoy and experience the places they visit, and they love that.

“I could go to the High Desert Museum five times a year and still find something new and exciting to learn,” says Waltosz.

The sports trips are long.

“The bus drivers around here commit so much of their time driving to away games,” says Dena (Leib) Dunn (’98) who traveled for sports as an Outlaw in the late ’90s and now has a son of her own traveling with the teams. “Away games around here are AWAY!”
The group of drivers gets along so well that for the last several years they have scheduled a “bus drivervacation” for the first week after school is out – each driver that chooses to go saves all year and enjoys a group trip to places like the coast or Southern Oregon.

“People ask all the time, you really want to vacation with the people you work with?” says Waltosz. “These people are my family. We have so much fun together.”

The memories the drivers are making aren’t just their own. The impact they have on the students of Sisters Country lives on beyond school years.

Dunn remembers “my driver was awesome. I still can’t believe that she knew everyone’s names – that’s impressive! There were so many of us.”

The district is always looking for good people to drive. For more information on how to become a bus driver for the Sisters School District please contact the Transportation Secretary at 541-549-8521 ext 4011.